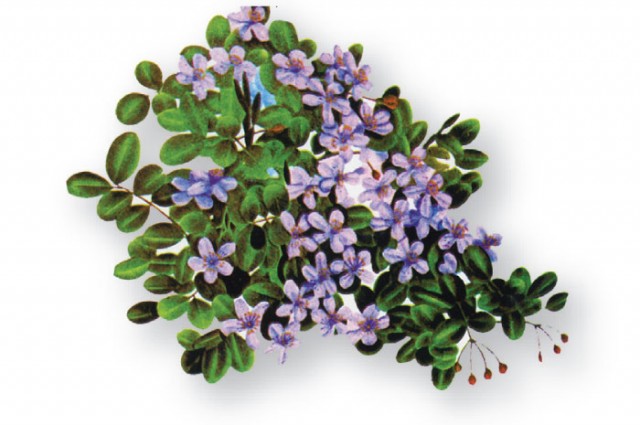 Jamaica National Flower - The Lignum Vitae (Guiacum Officinale) was found here by Christopher Columbus. The short, compact tree is native to continental tropical American and the West Indies. In Jamaica, it grows best in the dry woodland along the north and south coasts of the island.

The plant is extremely ornamental, producing an attractive blue flower and orange-yellow fruit, while its crown has an attractive rounded shape. The tree is one of the most useful in the world.

The Meaning in the Name

Its name, when translated from Latin, means “wood of life” – probably adopted because of its medicinal qualities.

The body, gum, bark, fruit, leaves and blossom all serve some useful purpose. In fact, the tree has been regarded for its medicinal properties. A gum (gum guaiac) obtained from its resin was once regarded as a purgative. It was exported to Europe from the early sixteenth century as a remedy (combined with mercury) for syphillis and has also been used as a remedy for gout.

The wood was once used as propeller shaft bearings in nearly all the ships sailing the ‘Seven Seas’. Because of this, Lignum Vitae and Jamaica are closely associated in shipyards worldwide. It is a very heavy wood which will sink in water. Because of its toughness it is used for items such as mortars, mallets, pulleys and batons carried by policemen. Sometimes it is used for furniture.