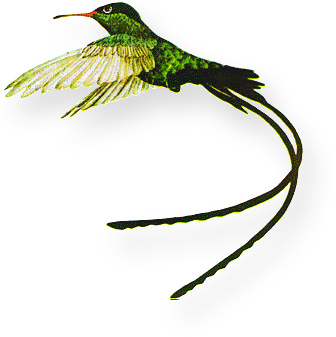 Jamaica National Bird - The Doctor Bird or Swallow Tail Humming Bird (Trochilus Polytmus), is one of the most outstanding of the 320 species of hummingbirds. It lives only in Jamaica. These birds’ beautiful feathers have no counterpart in the entire bird population and they produce iridescent colours characterstic only of that family. In addition to these beautiful feathers, the mature male has two long tails which stream behind him when he flies. For years the doctor bird has been immortalized in Jamaican folklore and song.

The Meaning in the Name

The origin of the name ‘Docor-bird’ is somewhat unsettled. It has been said that the name was given because the erect black crest and tails resemble the top hat and long tail coats doctors used to wear in the old days. Other schools of thought believe that it refers to the way the birds lance the flowers with their bills to extract nectar. According to Frederic Cassidy the bird is an object of superstition. The Arawaks spread the belief that the bird had magical powers. They called it the ‘God bird’, believing it was the reincarnation of dead souls. This is manifested in a folk song which says: “Doctor Bud a cunny bud, hard bud fe dead”. (It is a clever bird which cannot be easily killed).

Cookies on In Jamaica.
This site uses cookies to store your information on your computer.
Read more east Accept done Deny remove